I have an obsession for beautiful islands. Recently, I visited Sardinia for the first time. If you’re not familiar with this place, it’s the second largest island in the Mediterranean, part of Italy, about the size of Vermont. It’s a Blue Zone, and I’m interested in learning more about life as it relates to human longevity. Not only is Sardinia an island of centenarians, but it’s natural and rustic, full of green valleys dotted with sheep near the most stunning beaches in the world. As a writer, Sardinia’s antiquity and culture inspire me, not to mention its peace. 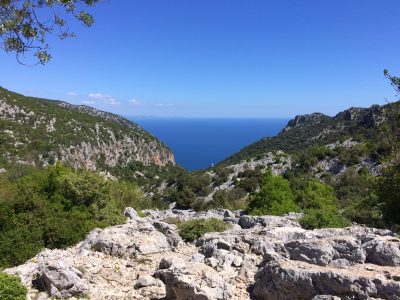 I stayed in Baunei and enjoyed gelato made from sheep’s milk, as well as pecorino cheese. Not only was the food delicious; it made me feel good. I wish we had lots of sheep and sheep’s milk in Michigan where I live now—they certainly have the needed coats. Food was cheaper than I expected in Sardinia, probably because the people are so self sufficient. Having recently lived in Tuscany, I can confirm that lots of products were less expensive than on the mainland.

While the town was quiet, and a good number of homes were falling apart and vacant, there were plenty of locals around Baunei. It was heartwarming to see eight senior men attached at the hips, squeezed onto a bench in front of the church in the local square. All wearing top hats, they weren’t talking to each other, but looking around with friendly eyes and wide smiles. I wish I had taken a photo, but I was too timid to ask. 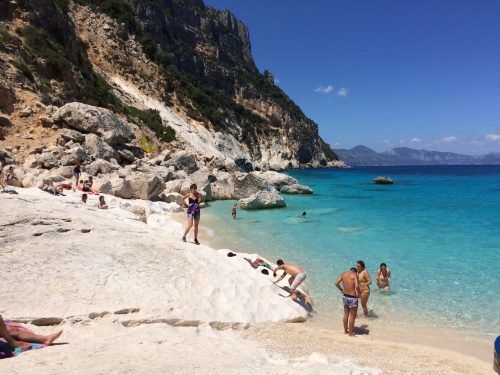 Since I was there off-season, it was a bit cold, but I was still able to get some beach time at Spiaggia Goloritze (a 2-3 hour hike over a mountain) and Spiaggia Santa Maria Navarrese. Goloritze is gorgeous, but I was sore for two days afterwards, so I took the car to Santa Maria Navarrese. There were just a few people on the beach there with lots of free parking. I suspect that changes during the summertime. For lunch, I had a favorite Italian meal: grilled bass with steamed mussels and a green salad. I also had some ancient bread, Pane Carasau. I normally don’t eat bread because I don’t eat gluten and grain products, but they assured me their bread was gluten-free. It was tasty and didn’t affect me in a negative way.

In the winter, I also traveled to Montserrat, BVI, Caribbean. I spent two weeks there, and fell in love with the landscapes and views. To my surprise, Sir George Martin of the Beatles lived there and I saw his house, and where Paul McCartney lived for two years with his family. This tiny island was home to Air Studios where countless other “famous” artists came to do recordings. The villagers didn’t know who they were, so they had lots of privacy and beach time. There’s an internet cafe with pics of them all and records on the wall. Air Studios came to an end when a hurricane destroyed the facilities and equipment.

The beaches in Montserrat are pristine, and some are completely vacant. My favorite is by Hank’s Beach Bar, which has good food but expensive. It’s really hard to buy good food from a grocery store on the island, and the few grocery stores that exist are very expensive, although there are mango trees everywhere. I did see several expat Brits going spear fishing in the late afternoon and evening. The wild chickens and roosters wander around aimlessly with a good life, making plenty of organic eggs. The island is also full of bats, which eat a lot of bugs so you don’t get devoured by mosquitoes. The air is fresh and clean, and the water which comes down from the volcano is full of good stuff. You’ll find agouti and iguanas everywhere. 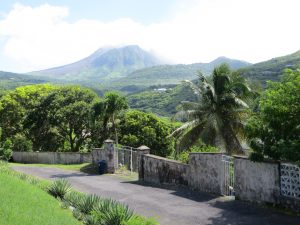 This is the Montserrat volcano

Part of the reason why Montserrat is so lovely is it’s unknown and untouched by most travelers in the Caribbean. This is because there’s an active volcano on the island, and it erupted twenty years ago destroying the capital city of Plymouth and many homes on the southern side. They actually closed off the whole southern island, which has just recently been reopened for some purposes but not all. While Montserrat is a beautiful place; it’s not for everyone. There’s only one bank and when I was there, the ATM machine wasn’t working. To live in Montserrat would require a plan to grow food for sure and possibly raise animals, but I was thinking about an agrotourism operation that combined study abroad.

The other island I hope to explore for a future home is New Zealand, but I don’t know when I’ll be up for such a long trip. I’d like to take a transpacific cruise over there, but unfortunately I don’t have the time now.

Truth be told, if you know how to travel abroad, and you’re not afraid of other languages and cultures, then you have so many more opportunities available. Let’s not underestimate this very basic skill in these volatile and scary times, especially in the event of war. Not only has my international knowledge helped me find rewarding jobs, but it has led me through most of my adult life and relationships. Having lived two years in Cameroon, two years in Ecuador, and two years in Italy, I’m very comfortable outside of my country. There’s so much to see and do–I’ve only just begun.

Thanks for reading. I’ll be back with more insights soon.

Wendy Williamson is an International Education Consultant and the author of Study Abroad 101, now in its third edition. 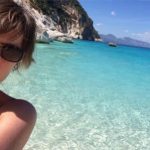